Ladder falls account for so many injuries every day. In fact, every day, someone loses their life to a ladder-related accident. More often than not, these accidents are caused by a simple, preventable mistake. Listen to George’s ladder fall story, so you can understand the importance of proper ladder safety.

George was an active man in his seventies, who looked after his household and enjoyed DIY projects and various home maintenance. He was fit and walked every day for exercise.

It was snowing in their New England home and George noticed an ice dam was causing water to leak inside of his home, so George went out to see if he could fix it.

Unfortunately, George was in a hurry and did not properly stabilize the ladder before he began his climb. It was only a short climb to the gutter, but George fell halfway up, landing on his back and hitting his head on the ground in the backyard, while the ladder tumbled on top of him. 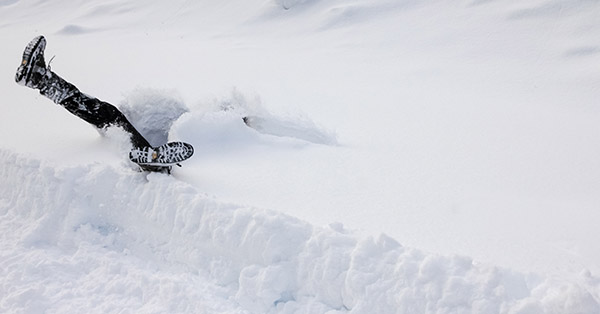 George’s wife and son ran to his aid and found George lying on his back on the snow– unconscious. His son rushed to call the ambulance. By the time he came back out, his father had regained consciousness and got up.

At the hospital, George suffered a seizure and his outlook was grim. The doctor said he may not make it, and he was in an induced coma in the ICU. Following the ladder fall, George was in the hospital for nearly six months, until he was released and able to return home.

If you believe this could never happen to you or a loved one — you are far mistaken. Ladder injuries occur like George’s every day, while some have fatal consequences. If you are considering climbing the ladder for a home maintenance project, gutter cleaning, or roofing maintenance, we urge you to use the utmost care and caution. Installing a gutter protection system, like LeafFilter, can keep you off the ladder for good, so you can stay safe on the ground. Find out how LeafFilter works and request a free estimate to say goodbye to gutter cleaning forever.